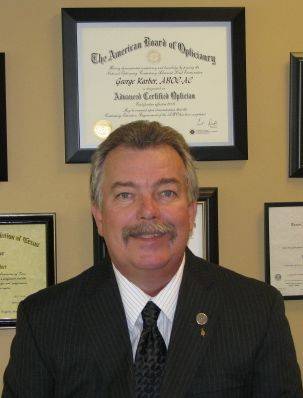 George has spent most of his thirty-eight years in optics working in Cypress. He holds an Advanced Certification as a Master in Ophthalmic Optics by the American Board of Opticianry (ABO).  He is a Fellow of the National Academy of Opticianry and is an Honored Member of the Optician’s Association of America. George is a Level III continuing education speaker who has lectured and written nationally on optics and Opticianry. In 2010 he was named Registered Optician of the Year in Texas.

George has extensive training in low vision and difficult eye glass Rx’s. Many area Ophthalmologists and Optometrists refer their patients to him for his excellent care. He also specializes in custom, one of a kind eye wear like jewel inlays and faceted lenses.

George manages both D.E.Y. locations but is usually at the North Cypress location. Along with outdoors activities, he and his wife enjoy time with their two daughters and 4 grandchildren.

Our Reviews
Email Us

This fun, interactive tool uses questions about you, your lifestyle and your specific eyewear needs to generate eyewear suggestions specifically tailored to suit you!